JC Scott takes an impactful snap shot of a girl chasing bubbles, leading him to question the actions we take now which will leave an indelible mark on the planet to be inherited by a younger generation.

I lead a pleasant life. For example I took this photo at a winery dinner this summer, attended only by invited guests. We all arrived by speedboat downriver from Kingston followed by a short SUV ride to the winery, just onshore and inland a few miles from the St. Lawrence River, near Rockport, Ontario. All the people at the party were invited because they own a certain type of very nice boat or were guests on the boats like me. The event was hosted by a vineyard, and it was there that I captured this Andrew Wyeth type image of a young girl, running freely and blowing soap bubbles in a field, just before sunset. 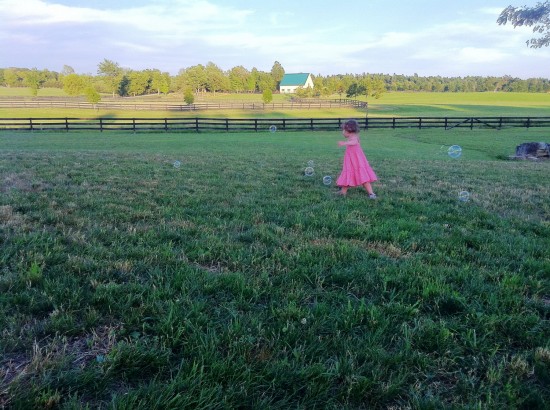 Who will protect this hope for a future where young girls can run in fields, this delightful innocence, this pastoral calm? Who will occupy this space? The parents of this girl, who are upper middle class yacht owners, are dependent on a structure that is being eroded and corrupted by that now infamous 1% and although they themselves may aspire to that lofty 1% niche in society, I know from my personal experience, how far upper middle class is from that 1% niche. As someone who attended my country’s most exclusive boarding school on an academic bursary, I learned that 50 feet is nowhere close to a 500 foot yacht and with boats that’s how boats, and wealth, and real influence are measured.

There is a space occupied in normal times by the upper middle class, where meretricious social values form the backbone and define the ideals for the enhancement of society. These ideals are crumbling, being eaten away by the dominance and social reward of sheer greed and the untrammelled criminal behaviour of Wall Street within our North American political system. Today the architects of shadow economies and debt derivatives are now the deans of Harvard and Columbia business schools and the perpetrators of deceit are now the current draftspeople of White House and thereby Canadian fiscal policies.

Passing along to this girl, a dept as great as any society has ever passed to the next generation is simply not fair. The space we all need to occupy is the space wherein humanity, ecology and liberty define that absolutely no one, no matter what politician they may own, is ever allowed again to steal this beautiful girl’s future, steal her hopes, threaten her health or diminish her ability to generate her own wealth. That is the space I wish to occupy, a green field, on a healthy planet with no financial or carbon debt passed from one generation to another. Occupy this space with me and with the 99% if you have the will.

Frank Arnold
The Clear Plan To Change. By JC Scott

Attention Zoomers: Evolution Does Not Know How to STOP! By JC Scott