Blog
You are here: Home / Blog / Eco Articles / Eco Fishing: Can an Environmentalist Designer also be a Sport Fisher? By...
The question I asked myself after being invited by a client to be a guest at a fishing resort was: can this be eco-sensitive? And the answer is contained in this post.

First the temptation: the resort is a private, guided resort called Escott Sportfishing in Masset, BC, where there is undoubtedly some of the best sport-fishing on the west coast of North America, and south of Alaska (which we could see on the clear days). We would be fishing with a famous fishing guide and TV presenter Gary Cooper who would be filming the fishing experience for his series “Nice Fish”. 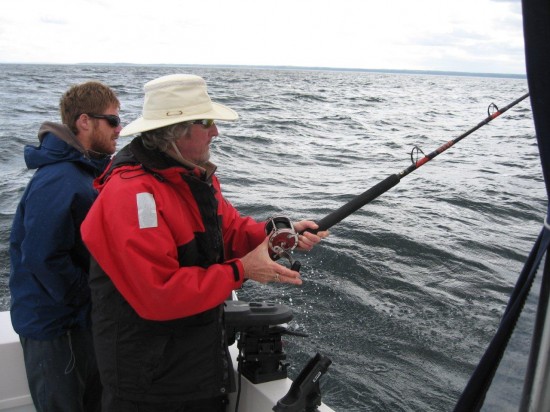 Finally, did I say guest?  Fishing resorts in Haida Gwaii are expensive places to stay. They are usually full during fishing season, booked well in advance and costly to get to by air being on an island far off the coast and far north of all major cities. So this trip was a very special offer, for which I was grateful. It was described to me as a trip for designing and supervising the completion of a successful ecological beach house in the Baja for a client who is a TV producer.

The challenge: I have committed to leading a more sustainable life, I am a dedicated environmentalist and I want to be open about what I am doing with my life through my blog and on the site Life as a Human. So I had to ask: “Is fishing OK?”

I’ll describe the experience and you can help me decide. We met in Vancouver at the South Terminal of the airport where smaller planes make regional flights. The TV presenter/fishing guide Gary Cooper and his cameraman Eric had a lot of gear. We flew on a small propeller plane directly to Masset, which has an airstrip because of a military listening station that was built and manned there for many years during the cold war. 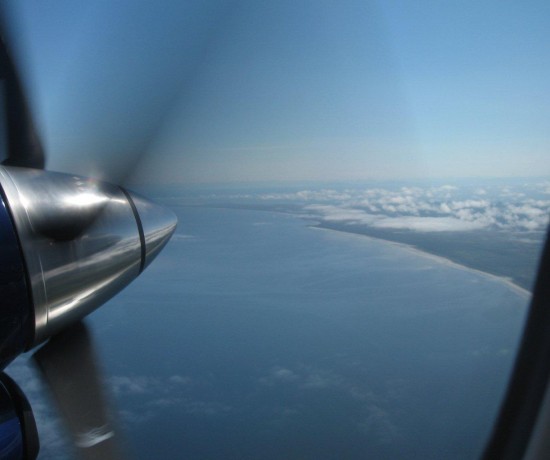 The air base is still functional largely because of sport fishing, so this type of fishing activity is definitely economically sustainable for the Masset community. Many people on our flight, in fact most, were actually locals travelling by air for convenience taking advantage of this passenger service. Two Lear Jets were parked at the end of the airstrip. The car and ferry alternative for locals is virtually a two day trip; we were two hours by air. There was a young mother and baby on one leg of the trip and many young First Nations Haida on both flights.

Masset airport is so small and regional that after we waited some time for our luggage and nothing turned up, one of us found it all, neatly stacked in the parking lot outside the small terminal building. We were met by the resort manager Dan who escorted us to the lodge, a short drive away. The lodge is a mid-sized wooden three story building facing east into the sunrise, right in Masset Harbour. The fishing boats we used are moored on the opposite side of the harbour. Sunrise is an important word in fishing, and anyone who has fished seriously will know this: like a ski trip, days usually start before or during first light. It was June and we were far north so days were very long, starting early and ending so late that going to bed before dark was common.

Within two hours of landing, we had our gear in our rooms, we were wearing safety vest function, full body ‘cruiser suits’ and rain boots and we were on the water! There was wind, so it was a little rough even in the harbour. On the way out, one boat stopped and had to go back but eventually we all congregated at the ‘seven mile bell’ where we began fishing in ocean swells with a strong wind and tidal current. I was fishing with Sam our guide and Mike, my roommate for the weekend, a dedicated fisher from Abbotsford, BC, where he works for the city. Mike is bald with a beard that would qualify him a stageworthy with ZZ Top. 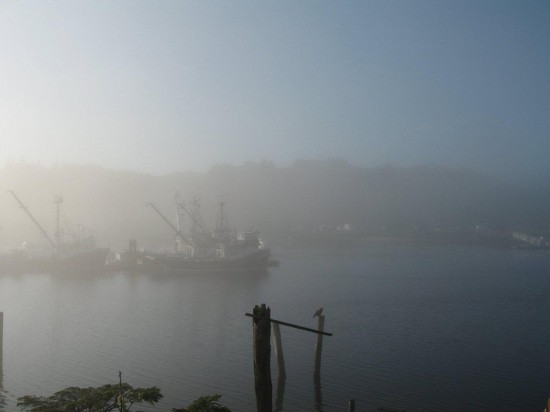 Well before we expected it, we had our first Chinook salmon in the boat. Smaller fish and other species were caught and released carefully. While fishing in the strong winds, we discussed wind power potential with Sam who also works as a forester and who is therefore, through his work, a conflicted environmentalist.

There is a wind power plan for the area where we were fishing which is being opposed by environmentalists! What a dilemma that is — Haida Gwaii has some of the strongest constant winds on the West Coast of North America. There are plans to drill for oil on the seabed in the same area and the one thing that might mitigate the oil demand, which is wind power, is being opposed by environmentalists. Their case is good, however, because the wind farm will temporarily disturb a crab migration. But I feel a plan could be implemented like bridges over the Arctic pipelines for migrating caribou herds. This could ameliorate this disruption of the crabs in their natural habitat.

Back at the lodge our gourmet chef Adam had been preparing appetizers and when two salmon were donated to the kitchen for dinner, the menus was set. In fact every night we ate our own catch for supper: salmon and halibut. I’ve never had better salmon; his presentation was also perfect, on polenta with asparagus. Adam informed us while we enjoyed his dishes that he had just finished cooking at a very busy gourmet Vancouver restaurant, Sasur, during the Winter Olympics. 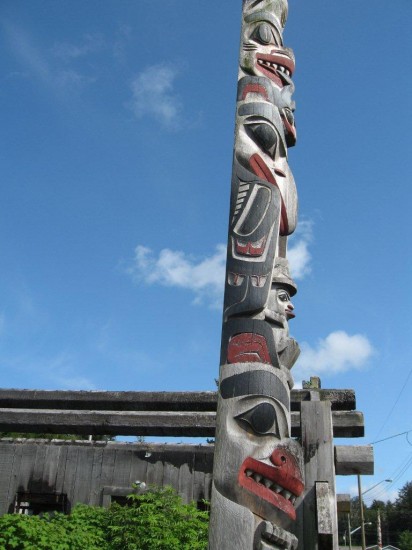 It just kept getting better as we moved from bite to bite, so was eating the fish which we caught that day sustainable? It certainly felt good that we were valuing our catch, sharing it with our hosts who ate the same meal when we were finished, and it seemed to be the best way to appreciate the salmon we had killed ‘in sport’. Salmon in these waters will soon die naturally as they have returned to spawn and the resource is managed so that a return of adequate numbers of fish is guaranteed by the Native stewards. Our guides were interviewed each day at the dock by Haida fish management officers.

Our evenings were filled with watching eagles in front of the lodge, walking the village and enjoying the first people’s art in the lodge. The Haida are internationally famous for the quality of their artistic output, including poles, graphics and their longhouse architectural heritage. We enjoyed Old Masset where the Haida in the area live and where we visited a gallery and purchased various pieces. My purchases were modest but my host purchased a carved paddle produced by an artist from one of the best recognized families, the Edenshaw’s. 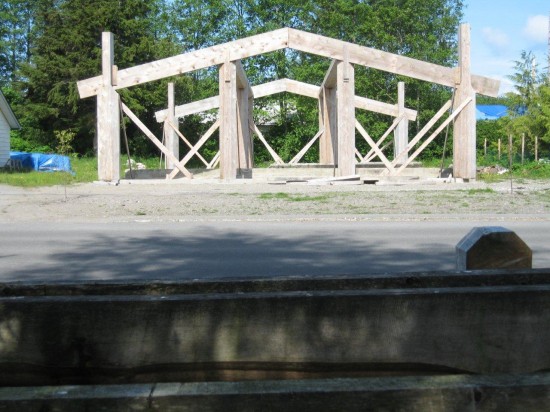 Is art tourism sustainable? I feel that it is natural to human existence to trade for cultural artifacts and souvenirs and our small group made a significant financial contribution to the local economy. The UN definition of sustainability defines economic sustainability as equal to social and environmental as the three pillars on which we should base our actions.

We fished three days, we all caught our legal limits, and we returned fish to the sea. The experience reminded me of many things. I love being in nature, because even when it’s wet, windy and rough on the ocean, the feeling of being out and alive is enhanced. Catching and eating your own food brings the cycle of life into sharp focus. We honoured our catch, but we were predators in the wild. 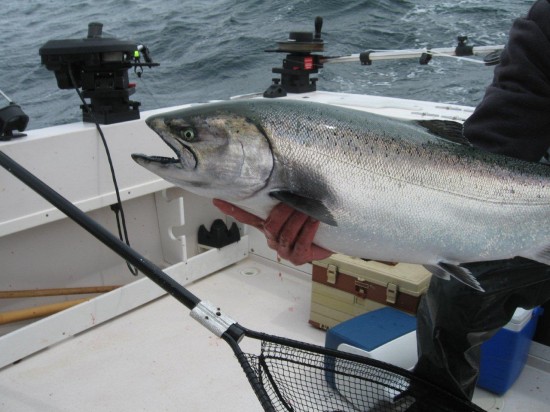 If oil drilling is allowed on our coast, then like the Gulf of Mexico, we will become vulnerable to oil spills and ecological disasters. I have to continue to do what I can to show people that this planet is too good to abandon to the pursuit of wealth over life itself. I’m going to research the wind farm and promote new technology for our waters. So my take-away was a box of fish that we will eat through the summer and an enhanced respect for nature. These are reminders of my responsibility to protect what we have.

So was this an environmental responsible trip? I think yes and no, for like many things in life there were compromises made, and nothing is ever as perfect as we hope. But to be in nature and to appreciate our planet, must surely be one of the first steps that all of will take toward a greener future.

All photos courtesy of J.C. Scott

Why I Went Green: An Artist and Designer’s “Aha” Moment. By...