Blog
You are here: Home / Blog / Eco Articles / Too Big to Fail: Planet Earth Ltd. By JC Scott
If our planet were a corporate entity like the big banks or financial houses, wouldn’t we also deem it “too big to fail” and do everything in our power to prevent catastrophic consequences?At the height of the recent financial crisis, we all learned a new business expression, ‘Too Big to Fail” which was the reasoning applied to use of public funds to save banks and financial houses. These entities were so large, we were told,  that their failure would have catastrophic effects on society.

In real terms that matter more to me, the one entity that truly is too big to fail without yielding catastrophic consequences — and the primary entity that we should concern ourselves with — is the venture called Life on Planet Earth Ltd.

Why call it Planet Earth Ltd.? Because the Earth and its resources are indeed limited and, without doubt, our venture here on earth at this time is both in peril and “Too Big to Fail”. 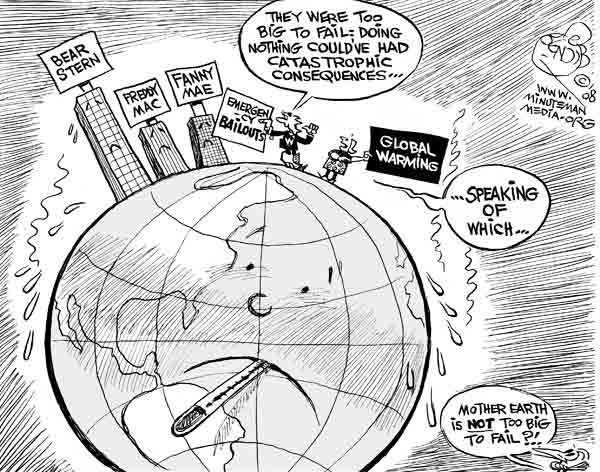 It is my contention, however, that with the type of determination and resolve used to save the big banks and the global banking system, there is hope. If we apply ourselves in a common direction, with purpose, vision and determination, we can indeed save the Earth.  Your job in this business is to decide if this is something you are ready and able to commit to. If it might be, then read on.

In Britain, a spokesman for UK Uncut, an organization which has held protests over the issue of saving banks, said: “The banks are holding the Government and country to ransom but it’s society that’s too big to fail, not the broken banking system.”

My viewpoint takes in even more than society in Britain.  Try to imagine the whole world (when I try this, I like the view from space; it simplifies the task).  If we were watching the Earth from space during my lifetime, we would have seen polar ice caps melting; the peaks of formerly snow-capped mountains all over the world showing through as rock; and larger and larger brown areas in Africa and South America near the equator expanding into once green regions. Yes, the world would still be blue in the oceans, but larger and larger patches of floating debris as big as small continents or immense islands would be visible as bobbing testaments to our disrespect for the interrelated nature of our own existence.

If the environment were tied to money, and bankers were then put in charge, they would be more aware of how this large entity called Planet Earth Ltd. is simply “Too Big to Fail”, and catastrophic effects would be stopped by focussed actions. But bankers don’t control the environmental agenda. The largest single obstacle the Earth seems to face is lack of long-term planning and thinking by the democratic political systems we hold so dear.  Anyone looking far enough ahead to worry about the future landscape their children will inhabit might take a very different view than political parties who campaign for re-election every two to four years.

The speed of change on our planet and the quick turns of democracy are not proving to be capable of dealing with massive, slow and irreparable damage, no matter how much political rhetoric is spilled on the issues. The mess from each term in elected office is left for the next holders of those offices to deal with or pass along.  As voters we need to demand long-term policies for long-term problems as commitments from our representatives.  We may need more bodies like senates which have extended time frames in which to deal with these issues.

Although money moves quickly all over the planet, climate change is happening slowly — but it is also happening all over the planet. Further, whereas money and its related systems — once deemed “Too Big to Fail” by our politicians — have come into politicans’ focus as urgent global concerns, the same politicians, when challenged at global summits on climate change, find prevarication, delay and confusion to be more easily embraced than the tough choices they need to take to save our most valuable entity of all — life on earth.

Massive developments like the northern oil sands are being exploited to extract the last major carbon fuel source known on the planet, but this comes at massive environmental cost in exchange. We are using up valuable non-renewable resources simply to extract slightly more non-renewable ones. Like me, you may find yourself wondering,”What are we doing?”

We have solutions today. For example, we have enough energy striking the planet daily to fulfill all our needs; we have oceans of water and a life-giving atmosphere but because these massive systems have no profit-making consortium of defenders, we are using them up as quickly as profit allows and we are treating our life-giving air and water simply as commodities.

Banks, oil companies and political parties are not too big to fail; in fact, they are examples of systems that are currently failing our planet — and they are failing all of us who depend on this globe for our existence.  The only entity on earth “too big to fail” is life itself.

Please ask the next politician you encounter, “What are you doing today about my future?”  Tell them “I think Life on Planet Earth Ltd. is simply ‘Too Big to Fail!’”

“Too Big to Fail” The Market Guardian by www.minutemanmedia.com

Frank Arnold
Are libraries on the shelf? By Pedro Arrais